Skip to content
You are here
Home > Resource > Pictish Stones

There are about 350 stones around Scotland inscribed with Pictish symbols and art. (We talk about the appearance of the Picts and where they came from in episode 4 of the History of Scotland podcast. It’s for members only, sadly, though it’s not x rated. If you want to join – click on Become a Member).

They are predominantly spread over the north and north east, as the map at the end shows. The stones have been classified into 3 groups.

Class I are the earliest, probably 6th to 8th Century. They tend to be unworked stone – i.e. the art is simply incised into a bolder. A really good example is the Dunnichen Stone, showed here. It’s a few miles north of Dundee and the Firth of Tay, just outside Forfar, in the territory once held probably by the Maiathai. It is probably 7th century, and it’s a large undressed slab incised on one face with the flower symbol, an ornate double disc and Z-rod symbol, and a mirror and single-sided comb. The double discs include running spirals. The meaning of the symbols is obscure. It’s thought they may word a language, which is not helped that although the Pictish language was probably Brittonic, we have not a single word of written Pictish remaining to us. Other’s dispute this, and suggest the symbols may be similar to heraldic devices.

Class II stones are thought to be later – 8th and 9th centuries. The stones tend to be rectangular, but critically they display both Christian and Pictish symbols. The Maiden Stone is a good example; it was erected in the eighth century AD when Christianity was filtering into the north-east. It shows a series of vivid symbols, carved in relief, and, on the other face, a round-headed cross, set between a possible calvary scene and a great roundel filled with interlace. The symbols include a beast or dolphin, mirror and comb. It could be that it was used a preaching site during the conversion of the Picts.

Class III stones are free standing crosses and gravemarkers. It’s rather disputed whether there should be a class III at all, since these are Christian artifacts with no Pictish symbols. They fall into the general insular artistic tradition.

Many of the stones use Ogham, a script developed in south west Ireland from 1st to 6th centuries. One interpretation is that Ogham script was inspired by contact with the Roman empire; a desire to develop writing but a desire also for it not to be Latin, the language of the invaders. The majority of the Pictish stones use a different form of Ogham, which appears to relate to Brittonic Celtic, rather than the Goidelic Celtic of the Gaels and Irish.

The images include obscure Pictish symbols, mythical beasts and animals.

The symbols are often found in pairs, which has lead to the theory that, rather than a language, they represent marriages, with each symbol representing a lineage. Only one of the symbols is really recognisable, the Comb and Mirror.

The ‘Z’ rod and ‘V’ Rod symbols, used in conjunction with other images, are the matter of continual debate as to their meaning – probably unlikely to be resolved. Ideas include a connection with the after life, or solar system, possibly astrological systems.

The wild animals and mythical beasts are beautiful and inspired representations. The animals include boars, salmon, wolves, and birds. Mythical beast include the Centaur, Mermaid and Water Horse.

Most famous is an unidentified beast, and so ends up being called the Pictish beast. It could be a dragon, or maybe a dolphin.  Whatever it is, it’s important; it appears on 40% of the stones where animal art is used. Like the more recognisable animals, it may well be associated with particular deities

Evidence of resistance to Christianity and Rome?

The Class I Pictish stones have been used as evidence of resistance by the pagan Picts to the spread of Christianity, which in the 4th and 5th centuries would have brought with it romanising tendencies; it was noted that often the stones occurred with square barrows; and that they rarely occur south of Pictland – where tribes like the Votadini were enthusiastic romanisers.

The theory seems now to be in disfavour. The stones are now dated to 6th century or later, after Christianity had reached Pictland, though the symbols themselves may have been developed earlier. The Picts were depicted by Roman writers and by writers such as Gildas as the enemies of Rome. The Symbol Stones may therefore reflect nativisim among Pictish Christians – a desire to preserve their difference, but within Christianity.

Distribution of the stones 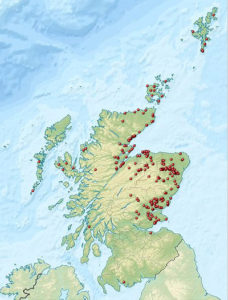 The distribution of the stones strongly mirrors Pictland. The first reference to the Picts came from the Romans in 297; it is quite probably an insult, or faintly derogatory name, the painted people. Derogatory because at the time, the old equilibrium established by Severus was breaking down into violence; the kind of body painting the name represents had fallen out of fashion elsewhere, so may have looked slightly archaic.  The tradition of the Sons of Cruithne, a Gaelic poem, was that Pictland was divided into 7 regions; other evidence suggest that the division between the kingdom of Fortriu in the north and the south was a major faultline. The stones lie on both sides of this divide.

A more complete glossary of symbols are below; a good place to go also for examples and where to see some of the stones  is http://www.aberdeenshire.gov.uk/media/13445/pictish-stone-trail.pdf, and also here http://her.highland.gov.uk/SingleResult.aspx?uid=THG7.

Your cart is empty

Subtotal
Shipping and discount codes are added at checkout.
Checkout